The Silicon Valley Business Journal has reported that office vacancy rates of 7.5% on the Peninsula are at the “lowest since the turn of the century.” The article notes that the low vacancy rates have been aided by Facebook leasing “135,000 square feet at 162 Jefferson Drive in Menlo Park,” and the 101,000 square foot lease renewal by Shutterstock in Redwood Shores. 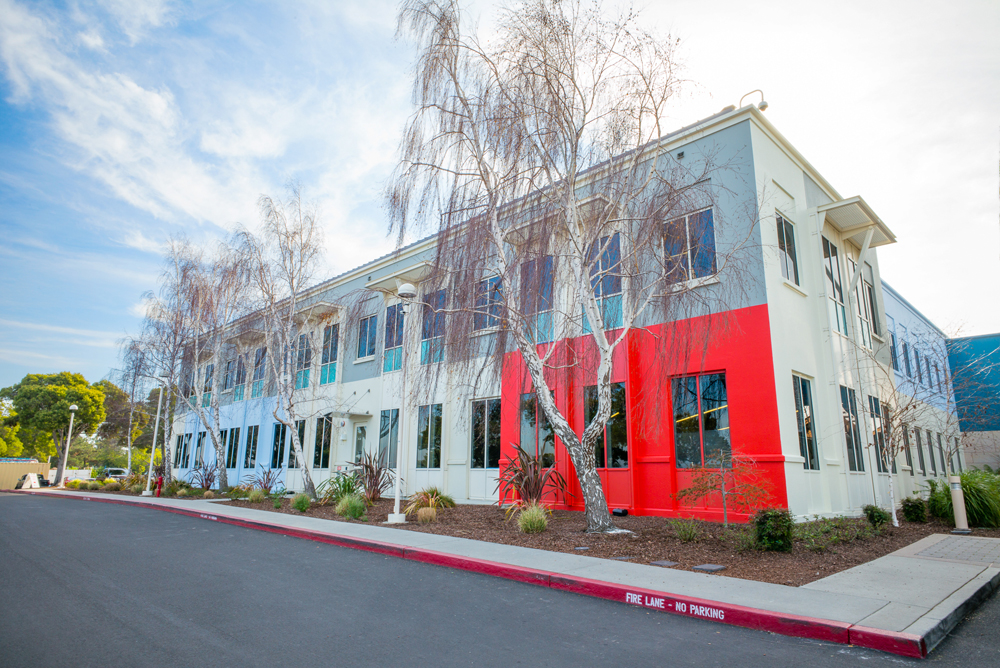 With decreasing vacancies, comes higher costs, and the Peninsula Area does not fall short on expensive rents. According to the article, R&D space averages $4.67 per square foot per month, a .9 increase from Q2,” with Menlo Park demanding the highest rents in the county averaging “$7.65” per square foot for R&D & office space.

“I think the big difference between the market then — i.e. in 2014 and 2015 — and today is really the lack of large growth requirements, and by that I mean big tenants over 300,000 square feet,” said Linde, according to a transcript.

Boston Properties, which had 5.8 million square feet of office space in the Bay Area market at 93.8 percent occupancy as of December 2015, is working on some of the largest office projects in the city. Along with minority partner Hines, Boston is building Salesforce Tower, which will be the tallest tower in the city when it opens next spring. Still, Linde cited some pullback.

“San Francisco has slowed from the pace that it was going at in 2014 and 2015. Silicon Valley continues to be very active and actually has been expanding,” he said. There’s a dearth of huge tenants such as Salesforce.com, Stripe and LinkedIn, who all signed huge leases over the past three years, he added.

“So technology is still a vibrant part of the market, it’s still expanding, it’s not quite in the same manner that it was in 2014 and 2015,” said Linde.

Linde’s perspective mirrors the consensus of many real estate brokerages, who have projected a slowdown this year after record leasing activity in the past few years. However, the majority of first quarter reports anticipates that San Francisco will remain one of the country’s most expensive markets. Asking rents are over $70 per square foot, and vacancy is hovering around 5 percent for Class A space.

But some real estate professionals fear that a full downturn could occur. They see a tech bubble, citing startups with unsustainable business models that are committing to huge blocks of space that they likely won’t fill.

Boston Properties, though, says its developments are filling up. Salesforce Tower is now 59 percent occupied, said Linde on the earnings call, and the landlord is in talks with both single-floor and multi-floor tenants. He said that by the end of the second quarter, the company hopes to complete another 100,000 square feet in leases.

In the past quarter, Bain & Co. and Vy Capital have signed leases at Salesforce Tower, underscoring continued demand from non-tech tenants. CBRE Group Inc., the tower’s own broker, is also close to a lease. Boston Properties also completed 535 Mission St. in 2014 and is seeking approvals for a 1.1 million-square-foot project at Fourth and Harrison streets in the Central SoMa district.

“We are very disciplined, both in our timing and the selectivity of sites,” he said. “While we evaluate every project on its own merits, we currently target 7 percent returns or better for our ground-up office developments.” Tymoff didn’t immediately respond to requests for additional comment on Monday.

Brokerage data also indicates that Linde’s comments on tenant demand may be inaccurate. JLL is tracking over 9.3 million square feet of current demand in San Francisco, including three tenants with requirements over 500,000 square feet.

The slowdown this year is in part because the last three years have seen record activity, and the pipeline of new projects, including Salesforce Tower, have rents as high as the triple digits.
“A lot of the growth has already occurred,” said Amber Schiada, director of research for Northern California at brokerage JLL. “If you’re a big company like that, you’re not eager to take on $80 rents or $100 rents.”

New towers in the Transbay district including 181 Fremont St. and Park Tower have signed no tenants, but those buildings also won’t be delivered until late next year or later, said Schiada. Tenants are showing a preference for pre-built space that is ready for occupancy, she said.

Mike Sanford, Kilroy’s executive vice president of Northern California, said that the company was still seeing strong demand. “Down on the street there’s just more activity, more tenants coming to the buildings, looking for space and then boots on the ground,” said Sanford.

Verily, formerly called Google Life Sciences, has subleased 407,000 square feet from Amgen to establish a separate headquarters in South San Francisco for the new Google division, which is gearing up to provide pioneering technology for medical research and devices.

The planned move 30 miles north from Google’s Mountain View, CA, headquarters, will place the new firm within a global hub for the biotech industry. It also takes a big chunk of the nearly 700,000 square feet of excess space Amgen Inc. (NASDAQ: AMGN) is seeking to sublet in the area. Amgen closed its Onyx Pharmaceuticals subsidiary last year after acquiring the cancer drug developer in 2013 for $9.7 billion.

An initial 400 Verily employees are expected to relocate to the new campus by the end of this year with the expectation that the total number at the location could grow to as many as 1,000 through future expansions.

“We are honored that Verily has chosen to expand into one of Alexandria’s world-class collaborative science and technology campuses,” said Stephen A. Richardson, chief operating officer and San Francisco regional market director of Alexandria. “Through our long-term relationship with Google, which dates back to 1998, we have been able to provide Verily with highly curated, innovative and integrated campus solution, which will help support its mission to use technology to better understand health, as well as prevent, detect and manage disease.”

Biotech real estate developers are rolling with the times, designing space for young, cash-flush companies desperate to hold on to talented employees who want more than a bench and a place to hang their lab coats.

Take HCP Inc., which is breaking ground on the second phase of its massive Cove at Oyster Point development in the sterile-and-scrubbed heart of the life sciences industry in South San Francisco. Along with two lab and office structures totaling 230,000 square feet, HCP’s next stage of the potential 884,000-square-foot project includes 20,000 square feet of retail, attempting to fill a desperate need among the thousands of biotech workers.

The first two-building phase, which will open in the third quarter, includes a marketplace-like food area on the ground floor as well as pool tables, table tennis and a two-lane bowling alley.

In the tech industry, such “amenity space” is commonplace in the tug-of-war to keep and attract fresh, young talent. Yet despite occasional events at individual companies — South San Francisco-based biotech granddaddy Genentech Inc. is well known for its bi-monthly “Ho-Hos” get-togethers — biotech has mostly maintained a buttoned-down focus on its benches and beakers.

Yet biotech executives and the developers who build space for their companies say that is changing. Employees can be in their labs at any time of the day or night, and the east side of Highway 101 in South San Francisco is largely a food and entertainment desert, so they often jump in their cars at break time. But the growing millennial workforce is different, they say, wanting services within walking distance.

BioMed Realty Trust, recently bought by Blackstone Group LP (NYSE: BX), is building out amenity space at a potential 595,000-square-foot campus in Foster City for Illumina Inc. (NASDAQ: ILMN). Across Oyster Point Boulevard from The Cove, BioMed has drawn up plans for similar amenities space at its Gateway of Pacific towers, which is entitled for 1 million square feet.

Companies are paying up for the space, too, in a tight real estate market. The first two tenants in the 250,000-square-foot first phase of The Cove — newly public cancer drug developer CytomX Therapeutics Inc. (NASDAQ: CTMX) and Denali Therapeutics Inc., which scored the largest startup round of venture capital for its focus on neurodegenerative diseases — will pay in the mid- to upper-$50 range after they move in the third quarter.

And for the next couple of years, The Cove and Phase 3 Real Estate Partners Inc., which last year bought the Centennial Towers project on the west side of Highway 101 and rebranded it Genesis-South San Francisco, are the main new, multiple-tenant life sciences spaces on the market.

“Ten years ago, a lot of companies could think two, three years in advance,” Friday said. “Now when companies decide they need space, they need it in 12 months or less.”

One of the first two buildings in The Cove remains unleased; the two-building second phase includes retail and a four-story parking garage — another sign of the times as developments have become denser with less surface parking.

Instead of parking, when the entire project is built out, The Cove will include a 5.5-acre open area with bocce ball, basketball and volleyball courts and a picnic area, said Scott Bohn, an HCP vice president.

The demand for The Cove’s first phase gave HCP confidence to start the second stage on time. What’s more, it helped them shape the footplates of the second phase, making them slightly smaller and more flexible for a wider variety of potential tenants, Jacobs said.

“The amenities center has really resonated as well,” Jacobs said. “Everybody we sit and talk to says, ‘It’s about time.'”