2017 is proving to be a banner year for large tech real estate transactions. From Facebook to Okta, “Bay Area tech companies are determined to grow in the city–whatever the cost.” And according to the San Francisco Chronicle, that cost is sky-rocketing. The Chronicle states that tech rents have increased “140 percent since 2010…and could go up another 10%.”

San Francisco continues to be the epicenter for tech and draws talent from all over the country–and that influx of workers to San Francisco is “not expected to slow.” Employment rates have always been associated with the health of the commercial real estate market. With workers tech workers streaming into the Bay, long established tech giants expanding and new start-ups popping up every year, office and flex space will continue to remain in high demand.

San Francisco-based Quantcast is replacing AT&T Inc. (NYSE: T), which vacated the space at the end of January, said a source. The swiftness of the deal is another sign that large chunks of office space are still being filled rapidly throughout the city, despite recent job cutbacks at prominent startups such as Zenefits and Surveymonkey. The asking rent in the building was in the mid-$70s, according to marketing materials.

Quantcast, founded in 2006, is also more established than many of the venture capital-fueled tech tenants that are growing rapidly. Quantcast was the 33rd-largest tech employer in the city with 385 employees as of January, up slightly from its 368 local employees in January 2015, according to Business Times research.

A Quantcast spokeswoman confirmed the lease and said the company will be relocating from its current headquarters about three blocks away at 201 Third St.

Twitter (NYSE: TWTR) moved into 795 Folsom St. in 2009, and then relocated to its current headquarters at 1355 Market St. in 2012. Current tenants at 795 Folsom St. include the real estate space provider Regus (LON: RGU) and gaming company Kabam Inc.

Landmark tech HQ building could fetch as much as $1,000 a foot in sale

The San Francisco landmark PacBell building could fetch as much as $1,000 square feet when it is sold, reports The Registry, a record price that points to how high office rents currently are – and the value they are bringing to commercial real estate sales.

At 286,092 square feet of office space and 9,000 square feet of retail, that could add up to $295 million for the building located at 140 Montgomery, which currently boasts tenants such as Yelp and Lumosity.

The Registry’s report posits those high rents that could drive up the sale price of the building, which Wilson Meany and Stockbridge Capital Group bought from AT&T in 2007.

“One of the reasons for the high sales price is the current condition of the rents in the property. The office building has rents that are closer to current market rents than any other office asset in the city at this time,” The Registry reports. “Should 140 New Montgomery achieve the $1,000 per square foot sale price, it would place the asset very close to replacement cost, which some sources in San Francisco have pegged to be close to $1,000 per square foot.”

“Yelp had signed an eight-year lease in 2011 to occupy nine floors in the building with an annual rental rate that began at $54 a square foot and is planned to increase to $66.41 a foot by the eighth year,” The Registry reports.

“The landlord granted an initial $5.8 million, or $60 a foot, tenant-improvement allowance, according to records filed by Yelp with the U.S. Securities and Exchange Commission. Lumosity signed a lease in 2013 to occupy 36,000 square feet, or three floors, in the building.”

Eastdil Secured, the listing agent for the property, didn’t return a request for comment from the Business Times. Wilson Meany confirmed to The Registry that the building is up for sale.

Link to Business Times Article: Tech HQ Could Fetch $1000 a foot in sale

Link to The Registry Report: 140 Montgomery

An acre of warehouses, sheds and gravel bunkers near the base of Potrero Hill could become home to San Francisco’s next hub of “maker” and tech office space, according to city filings.

The San Francisco Gravel Co. is in early talks with the Planning Department about whether its sprawling South of Market property at 552 Berry St. would qualify for the city’s 2014 legislation incentivizing the new construction of manufacturing space by allowing more lucrative offices on underutilized land.

It would be the second project to take advantage of the legislation now that Kilroy Realty Corp. is starting to develop 100 Hooper nearby with two-thirds slated for office use and one-third for “production, distribution and repair.” That’s a zoning designation reserved in part for manufacturing and light industrial companies that typically can’t afford high rents.

The Berry Street property is zoned for PDR and could not see offices rise on the site without the 2014 legislation.

“Based on an investigation of the property’s permit history and informal interpretation by the Planning Department staff, this property does indeed qualify under the criteria for the legislation. Further, it meets the purposes of the legislation in that SF Gravel Company had a very low employment density,” according to a letter to the city penned by consultant Badiner Urban Planning.

The gravel company, which has inhabited the property for nearly a century, also has tapped developer SKS Investments to study the site, according to the “zoning determination” letter sent to the Planning Department. It’s unclear how large the development would be if proposed.

SKS is accustomed to turning former industrial spaces into tech office beacons. The San Francisco-based company recently redeveloped the historic McClintock building – formerly used to manufacture dresses – and leased it up to biotech firm Invitae for laboratory use. It also transformed the former jewelry at 888 Brannan St. into office space for Airbnb.

Dan Kingsley, a managing partner for SKS, said “our plans are not firm” and declined to comment further.

San Francisco’s South of Market area could begin to see several office developments attached to new manufacturing spaces. Not only is Kilroy building a major property, but the city is planning to require some PDR in new large office developments under next year’s Central SoMa rezoning plan.

Until now, new PDR space has typically been economically infeasible to develop because of the law rents it generates. However, the 2014 legislation permitting office development to help fund PDR space is starting to change that.

In addition, the city has seen the rise of manufacturing companies with venture capital backing – creating a class divide with more typical ‘makers.’ That trend has concerned the like of SF Made, the influential advocacy group that will develop ‘maker’ space at 100 Hooper.

Emerging biotech companies are fighting a losing battle for space against deep-pocketed, aggressive tech companies. But Neil Fox expects to deliver a new life sciences option by this time next year.

The developer plans to immediately convert part of the existing 12-story tower for biotech companies by the third quarter of 2016, then start construction of a 21-story, 400,000-square-foot biotech-centric structure to the immediate north that would come online in the second half of 2017.

In a tight market for biotech labs/offices, Fox believes Phase 3’s focus on ready-to-occupy highrise space will be a winner. The vacancy rate for new biotech space in South San Francisco is in the low single digits, not counting a half-million square feet of sublease space held by Amgen Inc. (NASDAQ: AMGN).

If nothing else, Phase 3’s timing is impeccable: Space in the two-building, 253,000-square-foot first phase of HCP Inc.’s (NYSE: HCP) The Cove at Oyster Point already is booked for its third-quarter 2016 opening.

By the time, Phase 3’s 150,000-square-foot south tower upgrades for biotech will be ready, Fox said, and construction will be under way on the north tower.

“Our research says there’s a need across the board. That’s why QB3’s incubators (in San Francisco and Berkeley) are so full,” Fox said. “There’s no real second-generation space on the market right now.”

Indeed, a number of young and emerging life sciences companies — as well as larger, growing companies — are in a critical search for space.

Buoyed by a renewed interest by venture capital firms in early-stage drugs, those companies are bringing on more staff to push experimental treatments into studies in humans, but they often lose the space race to larger, established tech or drug-development companies that can lease floors at a time.

“We need the space last month, not a year from now,” said Ken Horne, CEO of Symic Biomedical Inc., a 17-person, two-year-old company with one potential treatment in an early-stage clinical treatment and another set to start in the first half of next year. “A year is hard for a high-growth, high-momentum startup.”

But Fox’s excitement about Centennial Towers isn’t based on timing alone: The development will offer biotech companies a high-rise option they don’t otherwise have in the Bay Area, he said, as well as space that needs a minimum of work for a quick move-in.

The Cove from HCP and the Gateway of Pacific project from BioMed, which is being acquired by Blackstone Group, have played up their tech-like campuses and amenities such as a bocce ball court and walking trails. But Fox said Phase 3’s differentiator with Centennial Towers is the high rise option that rarely is offered biotech companies outside of high-cost, high-density markets such as New York and Boston.

Working with San Diego’s McFarlane Architects, Phase 3 has floor plans that Fox said work for 95 percent of biotech companies. The space is a mix of 60 percent office and 40 percent general biology and chemistry labs — all with natural light.

“There’s no buried space in our buildings,” Fox said. “The quality of the project, the detail that went into it (by Myers), was something that was very attractive to us.” 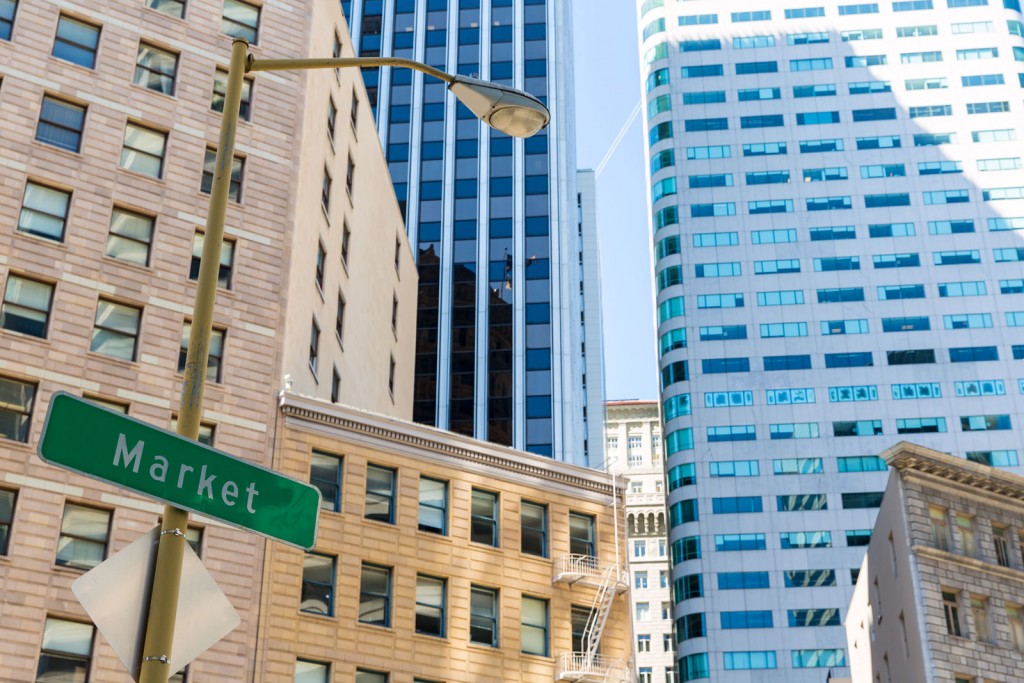