Investors continued to buy less commercial real estate in both the second quarter and the first half of 2017 compared to the same periods a year ago, a trend that started in 2016 as steady fundamentals that have resulted in generally robust occupancies and rental rate gains have boosted valuations across most property types.

However, CRE investment sales are still running about 10% above the historical sales volume average over the past 10 years, according to preliminary U.S. investment sales data collected by CoStar’s nationwide research team. In the second quarter, preliminary volume fell to $106.7 billion compared with $129.2 billion in second-quarter 2016.
The lodging property sector saw the biggest decline in the first half of the year compared with hotel property sales in the same period in 2016, including a significant drop in the second quarter from year-prior totals. Retail and multifamily also post sales volume declines of more than 20% in the first six-month period of 2017.

The drop-off in U.S. apartment transaction volume from previous peak levels is consistent with slowing rent growth and the market’s perception of oversupply, particularly at the top of the multifamily market, noted CoStar research strategist John Affleck.

That being said, even as buyers and sellers have continued to benefit from low interest rates, which supported the trading volume among all types of commercial property that resulted in the record-shattering pace of the last two years. With interest rate beginning to trend upward, the low-financing advantage enjoyed by property investors is expected to gradually diminish in coming quarters.

While industrial sales volume declined by double digits in the second quarter, the warehouse and light industrial market ended the first half of this year with the smallest decline among the major property types.

Conversely, office sales volume was roughly even in the second quarter of 2017 compared with the same period a year earlier, and was down only slightly in the first half compared to the first two quarters of last year and down by an even lower percentage for the trailing four-quarter period ending June 30, 2017.

Despite the modest declines in the sales volumes, “indications from our clients, especially lenders, are that the pipeline for 2017 is very strong for the remaining part of the year,” said Walter Page, CoStar director of U.S. Research, office.

Page also noted that office sales over the past year don’t factor in an additional $30 billion in new office real estate expected to deliver in 2017 due to the 90 million square feet of expected office deliveries within the top 54 U.S. metros.

“While the sales data is tracking property sales, the true level of capital transactions would count new construction as well,” Page added. 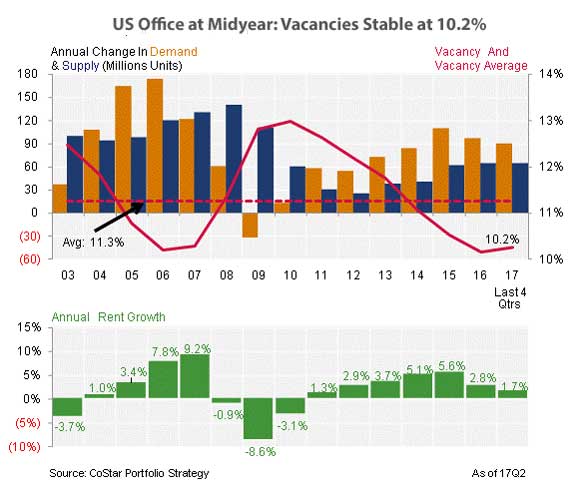 U.S. office fundamentals are tracking at a steady and balanced clip, with average vacancy holding at about an average 10.2% for each of the last four quarters, Page noted.

“The last time we had four quarters in a row with the same vacancy rate was back in 2003 and 2004, when vacancy was 12.5%,” Page said, adding that CoStar’s forecast calls for vacancy to remain in the 10.2% to 10.5% range until 2019 as delivery of new office supply is expected to track with demand and net absorption.

The preliminary data shows both suburban and CBD office properties logged increases in the average price per square foot between the first and second quarters of 2017, according to CoStar Vice President of Research Dean Violagis.

Likewise, the U.S. logistics and light-industrial property market remains in healthy balance, with more than $33 billion in U.S. industrial sales recorded in the first half, down only slightly from the same period in 2016.

Logistics occupancies have seen little change over the past few quarters, ending the second quarter of 2017 at 93.4% as second-quarter absorption totaled a strong 42.8 million square feet, driving the 12-month trailing average to 182.3 million square feet.

Strong interest from the capital markets should keep industrial yields low, even in the face of rising interest rates, Lupton concluded.

The ongoing spate of store closure announcements this year have had a measurable impact on the liquidity of U.S. retail properties, with investment volume decreasing by significant percentages in the second quarter and first half of 2017 compared to the same period a year earlier, according to CoStar Portfolio Strategy managing consultant Ryan McCullough.

The retail market posted its second straight quarter of flat fundamentals in the second quarter, with vacancies holding at 5.2%. Demand has lagged behind supply growth since the start of the year as the market officially transitions to a “late expansion” phase in the real estate cycle, lowering rent growth expectations for landlords, McCullough said.
However, the announced closures by dozens of national chains, including Sears, Kmart, Macy’s, JC Penney, RadioShack, Payless ShoeSource and most recently, Gymboree, have not had a similar effect on pricing, McCullough noted.

Retail property pricing has increased by 8.5% over the past four quarters, according to the equal-weighted CoStar Commercial Repeat Sale Index (CCRSI).

“This divergence is perhaps an indication that investors taking a more critical eye toward asset quality, being more selective about acquisition targets but still valuing performing assets highly,” McCullough said.

Both composite indices within the CoStar Commercial Repeat-Sale Index (CCRSI) posted gains in May, even as slower growth at the top end of the CRE market continued while overall absorption moderated and transaction volume continued to trend downward.

The equal-weighted U.S. Composite Index, which reflects more numerous but lower-priced property sales typical of secondary and tertiary markets, increased 1.3% in May, contributing to an annual gain of 16.7% in the 12-month period ending in May 2017.

Meanwhile, the value-weighted U.S. Composite Index, which reflects the larger asset sales common in core markets, advanced by just 0.3% in May, for a total 4.8% gain for the 12-month period ending in May.